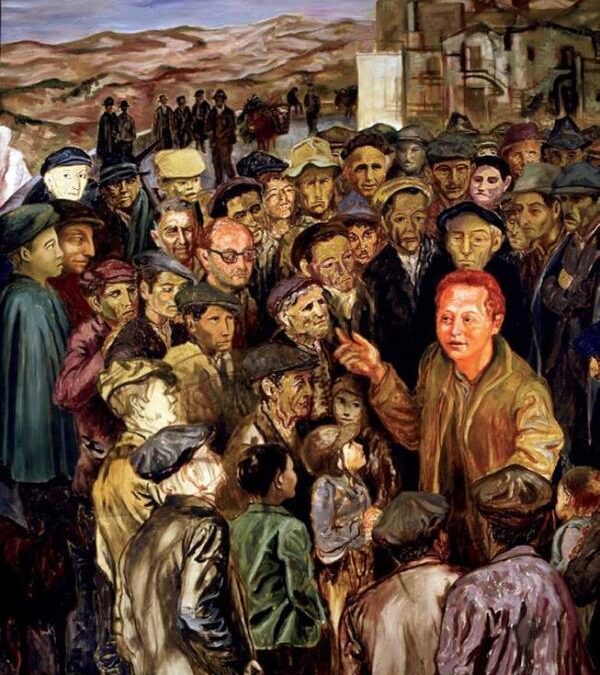 He had a short but intense life: 30 years of love for his land and civic passion. Rocco Scotellaro (simply Rocchino for everyone in his hometown Tricarico) is perhaps the most shining example of “lucanità” in modern times. Poet, mayor of his country, but above all a true man who took charge of the claims and hopes of his countrymen. The peasant poet “got his hands dirty” with earth and sweat to show that a prosperous life in the splendid Basilicata is not a dream but a right. In fact, “Dawn is always new” is the title of his most beautiful and well-known poem, in which he invites the peasants to drink “together a cup full of wine that at the hilarious time of the evening our desperate wind calms down … because along the perishing of the times the dawn is new, it is new ”. 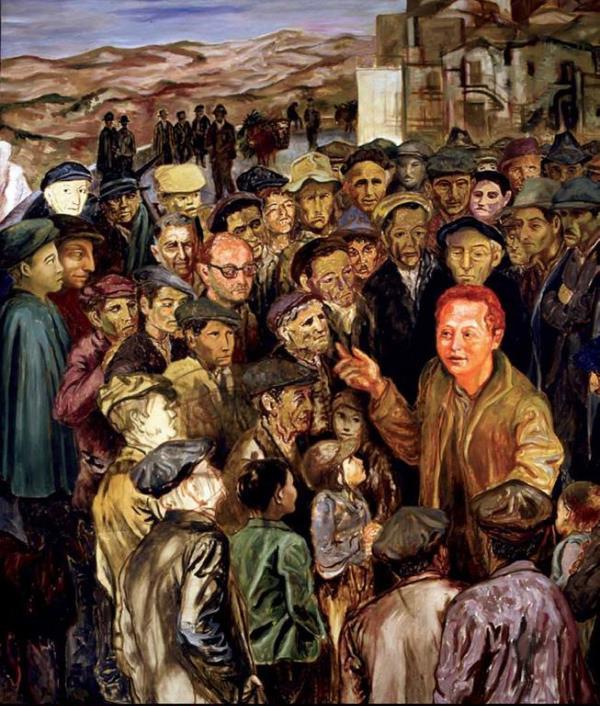 Detail of Lucania ’61 by Carlo Levi: Rocco Scotellaro with his people.

And the world in general but culture and tourism in particular just need a new dawn. That’s why, together with our colleague Angela Milici from A Spasso in Basilicata and with the collaboration of the other colleagues Anna Conti, Sara Morelli and Porzia Grossi, we conceived and organized an initiative at Palazzo Lanfranchi museum in Matera on February 26 called, in fact, Always new is the dawn. The best way to celebrate the International Day of the Tourist Guide, established in 1990 by the World Federation of Tourist Guide Associations and which occurs every year on February 21st (this year it was Sunday, with the museums closed due to the provisions of the last DPCM, therefore it was postponed to the following Friday). The main objective is to enhance the professionalism of the tour guides, who are daily committed to presenting the rich historical, artistic, architectural, landscape and food and wine heritage to visitors from all over the world. On this occasion, the opportunity is also given to raise awareness of sites that cannot normally be visited or that in any case are not affected by large tourist flows.

And so, thanks to the patronage of the National Museum of Matera with the enthusiastic support of the director Annamaria Mauro and her closest collaborators Silvia Padula and Grazia Di Pede, for the whole day we accompanied dozens of visitors to discover the secrets of the former diocesan seminary wanted by Mons.Vincenzo Lanfranchi in the second half of the 17th century and some art treasures that are exhibited there: from the suggestive hypogeal environments (exceptionally open for the occasion), a typical example of rock architecture that characterizes the city of Matera with cellars, cisterns and even a church, all carved out into the rock; to the room with the frescoes detached from some rock churches and then restored; to continue with the illustration of the big painting Lucania ’61 by Carlo Levi, which has Rocco Scotellaro as its protagonist, and then conclude on the terrace of the building with the extraordinary view of Civita, the Sasso Caveoso and the Murgia in the background.

The eyes shining with emotion, the amazed faces and the smiles of the people have confirmed this: the dawn is always new and the beauty never sets.

Below is the television report by TRM Network: